In between client projects in the studio ustwo designers and developers are encouraged to explore, create and up-skill in new areas. ustwo Sydney’s ‘Welcome Mural' started as a simple mural but, in typical ustwo fashion, the idea grew and it eventually became an immersive experience.

Bringing a physical space to life with AR is easier to do than ever before, partly due to the sophistication of AR technology, and tools such as Facebook's platform, Spark AR, becoming more accessible.

Bring a physical space to life through AR

Augmented reality (AR) enables us to create overlapping realities, allowing us to move seamlessly between multiple worlds. As the lines blur between the digital and physical, there are a growing number of opportunities for AR to enrich our three-dimensional spaces.

At ustwo Sydney, we wanted to showcase our local presence by creating an augmented reality 'welcome mural' for our studio door, that would create a delightful experience for the public, and encourage curiosity about our studio from people passing by.

To begin ideating we opened up a sketching and ideation session to the entire studio. We wanted to ensure everyone's voices were heard as this piece of artwork would turn into something they have so see every day they come into work.

Our participants were encouraged to share immersive and environmental experiences that resonated with them and then sketch out ideas for what ours could be. 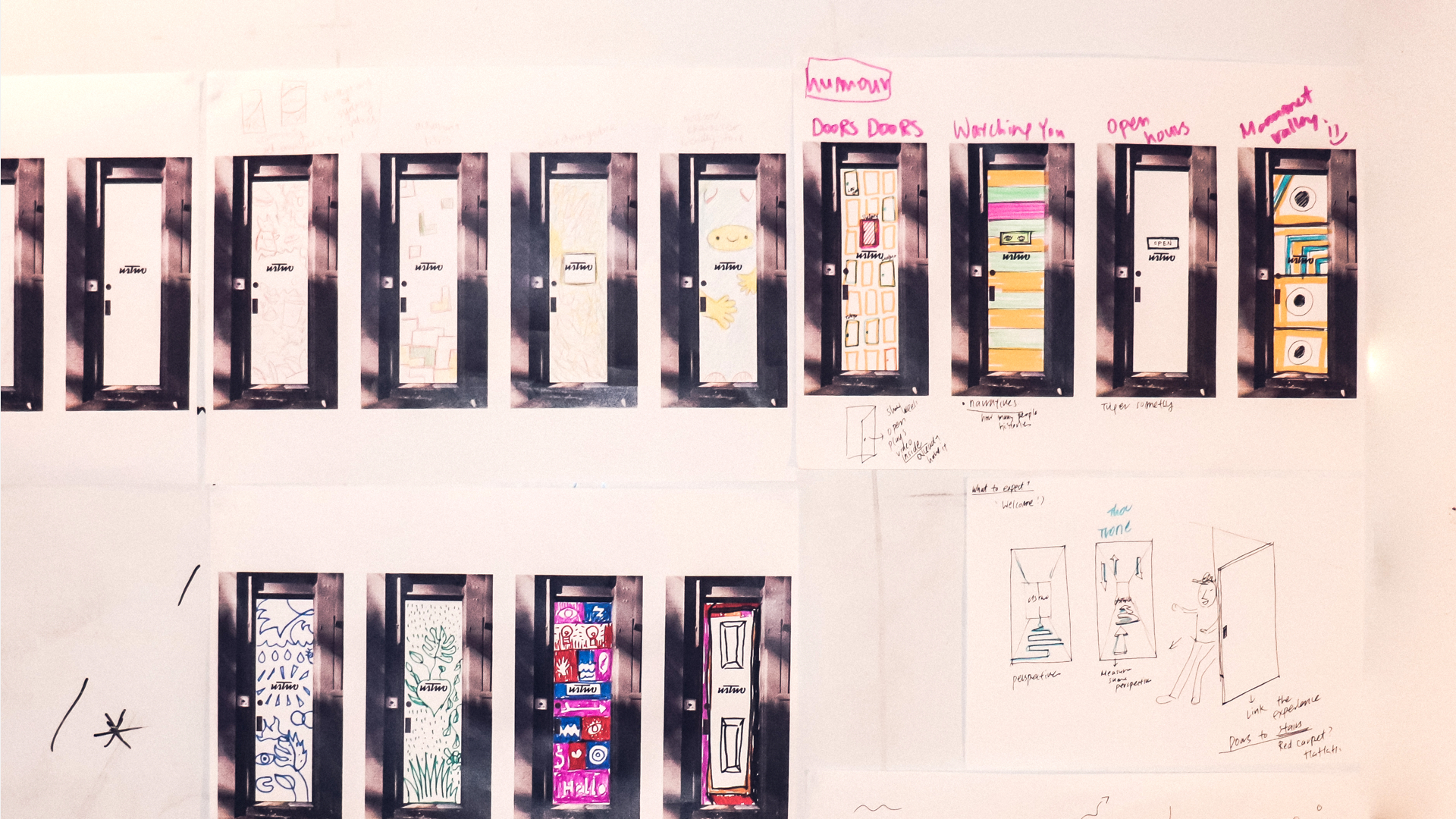 We wanted the ‘Welcome Mural’ to feel as 'ustwo' as possible. Our brand is vibrant and energetic but at its heart, it’s conveyed through our people and company culture.

Another consideration was the way the AR application would scan and recognise the artwork. The graphics needed high colour contrast distinction and a certain level of complexity in order to get picked up by a devices camera.

In order to achieve this, we used simple shapes and patterns to represent the ustwo values in the abstract. 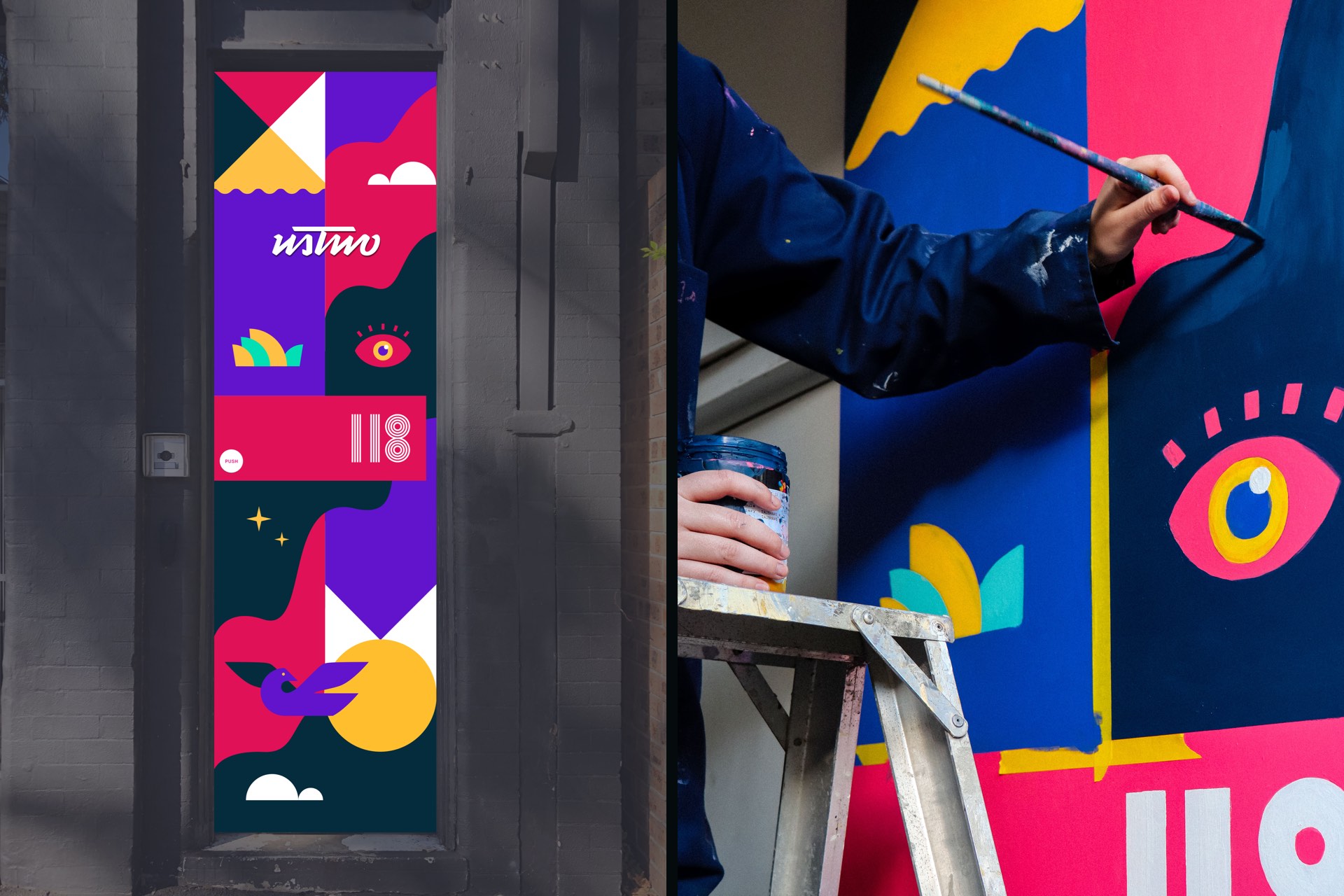 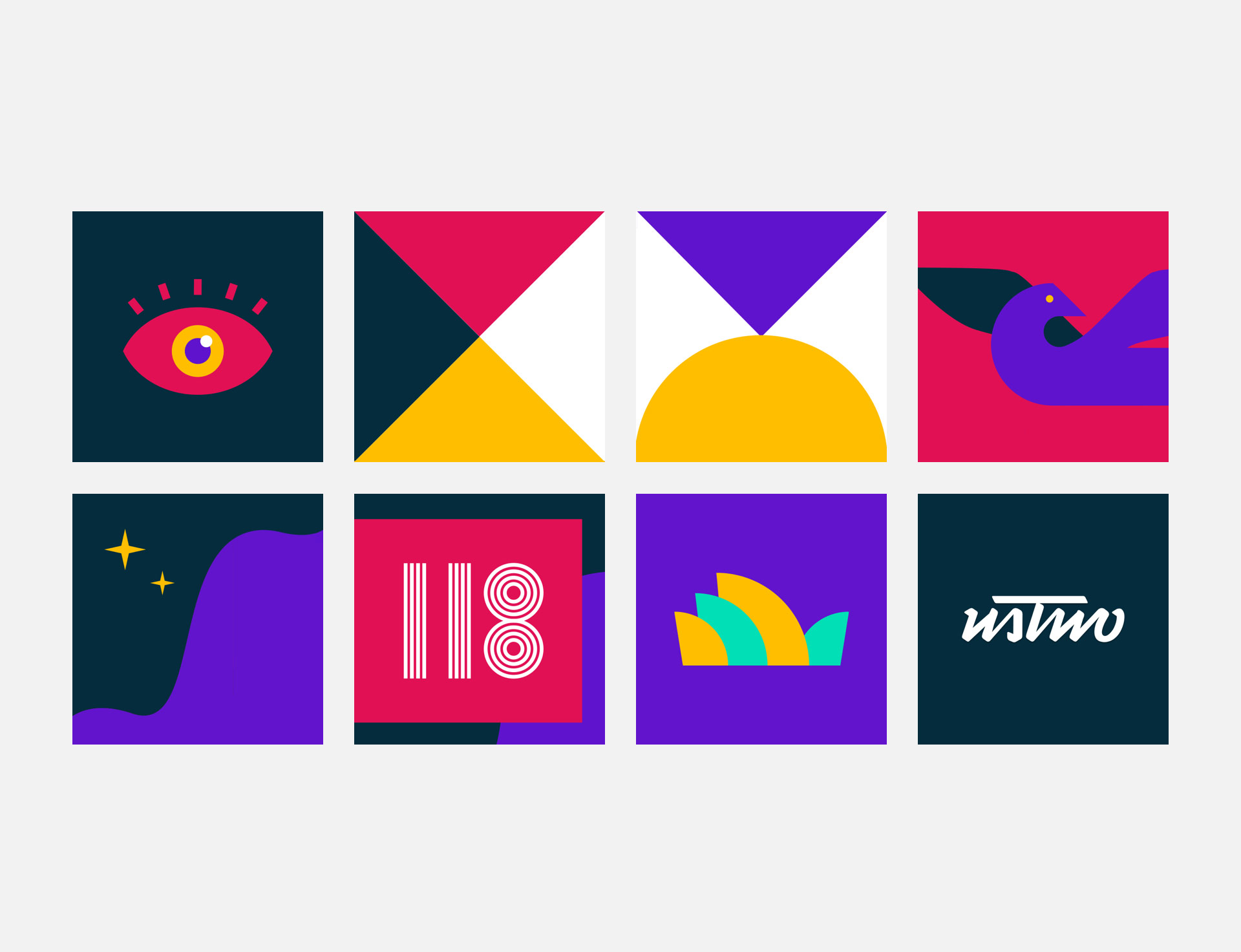 The values from left to right plus local-specific elements

The eye represents empathy and putting our authentic selves first.

The triangles connecting at the centre point represent the nature of collaboration.

The gold medal represents always pushing for the best

The eye represents empathy and putting our authentic selves first.

The sweeping mountain symbolises the journey 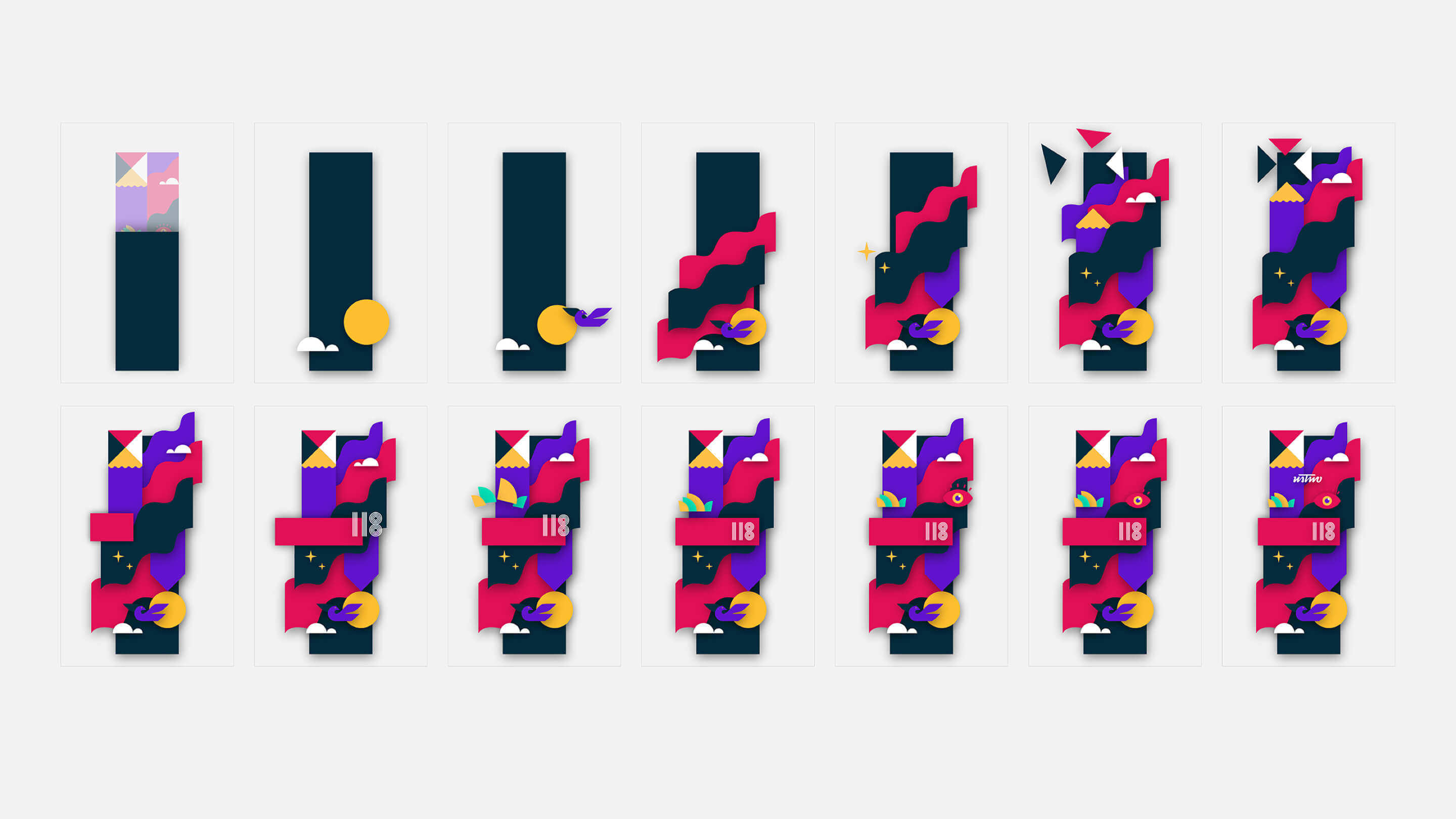 We started by importing our artwork into Blender where we were able to add depth, texture and motion in ways that would be impossible with flat visuals. Each element would be solidified, extruded and placed on the z-axis, which helped us determine which elements would appear closest to the user.

We used Spark AR, Facebook’s AR Design tool, to prototype the experience. A huge benefit of using Spark AR is that the final experience would be accessible to anyone with a Facebook account. 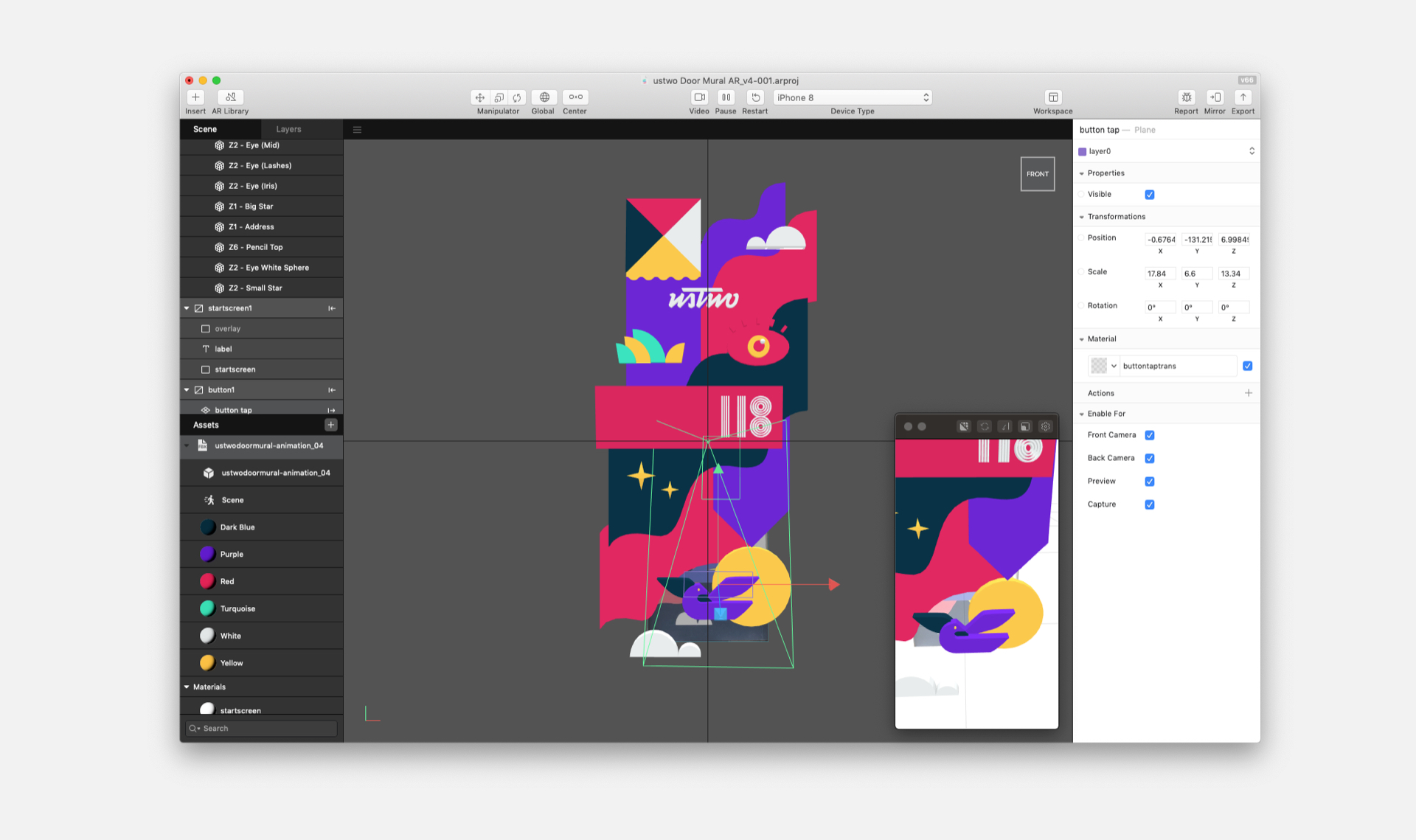 An important consideration is the physical space an AR experience will happen in. Our studio door is located close to a road, so we needed to be careful with how far the 3D elements would extend. We didn’t want people to feel dis-orientated and risk tripping over.

To handle this we designed an unobtrusive on-boarding user interface. We kept the design and messaging minimal to encourage exploration and curiosity.

We also designed and mounted a signifier with simple instructions and a QR code to let people in the vicinity know our studio door was interactive. 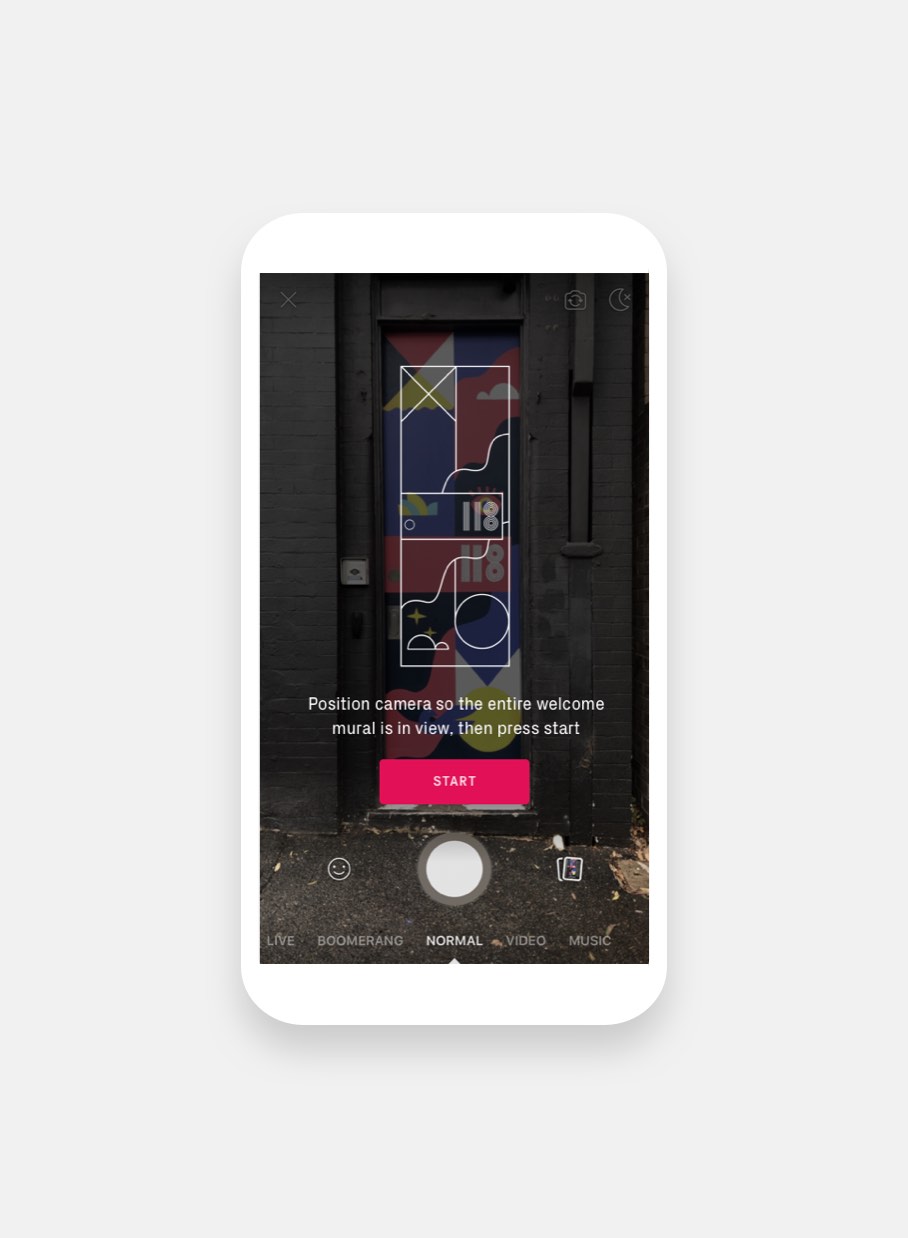 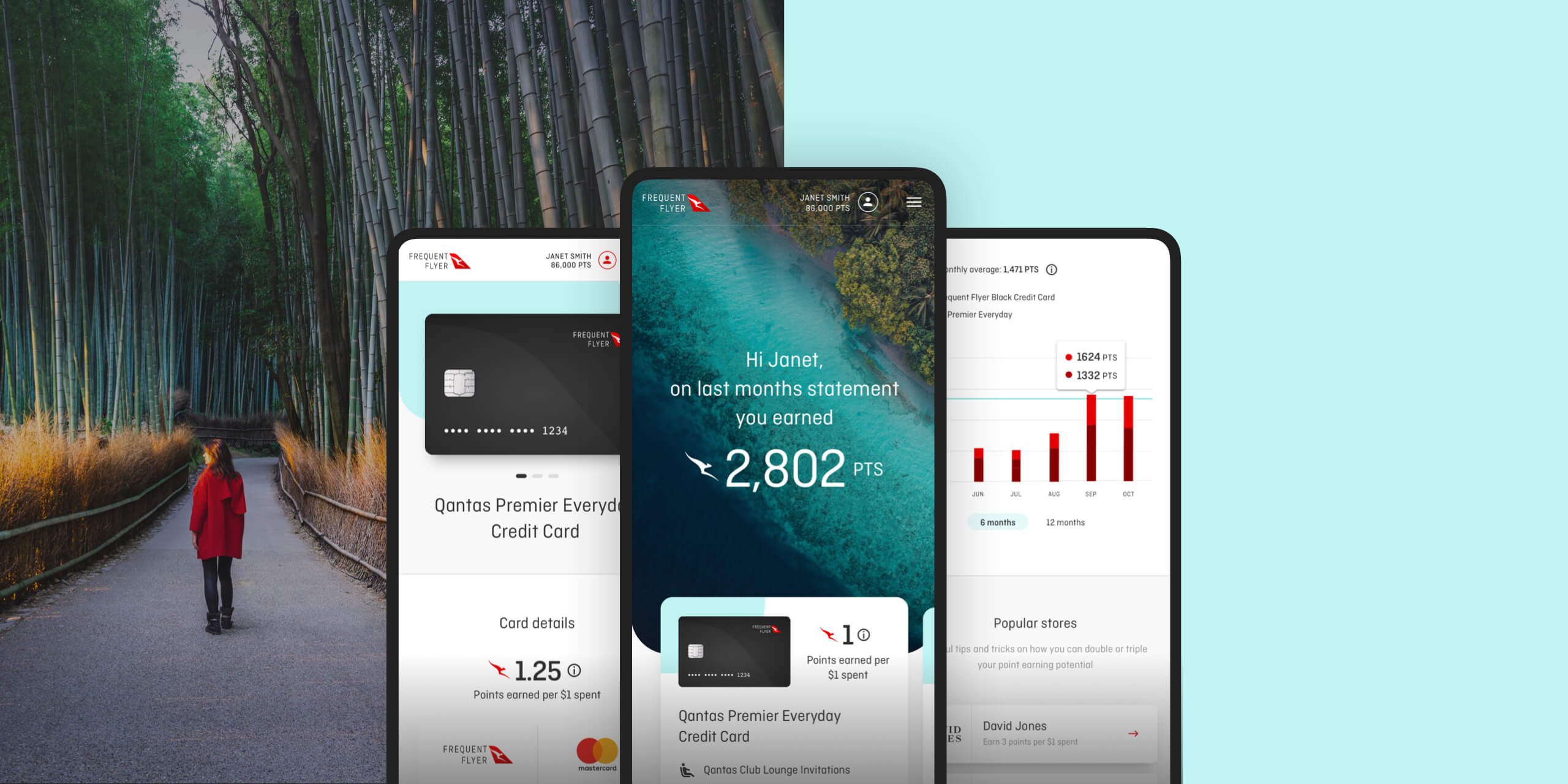 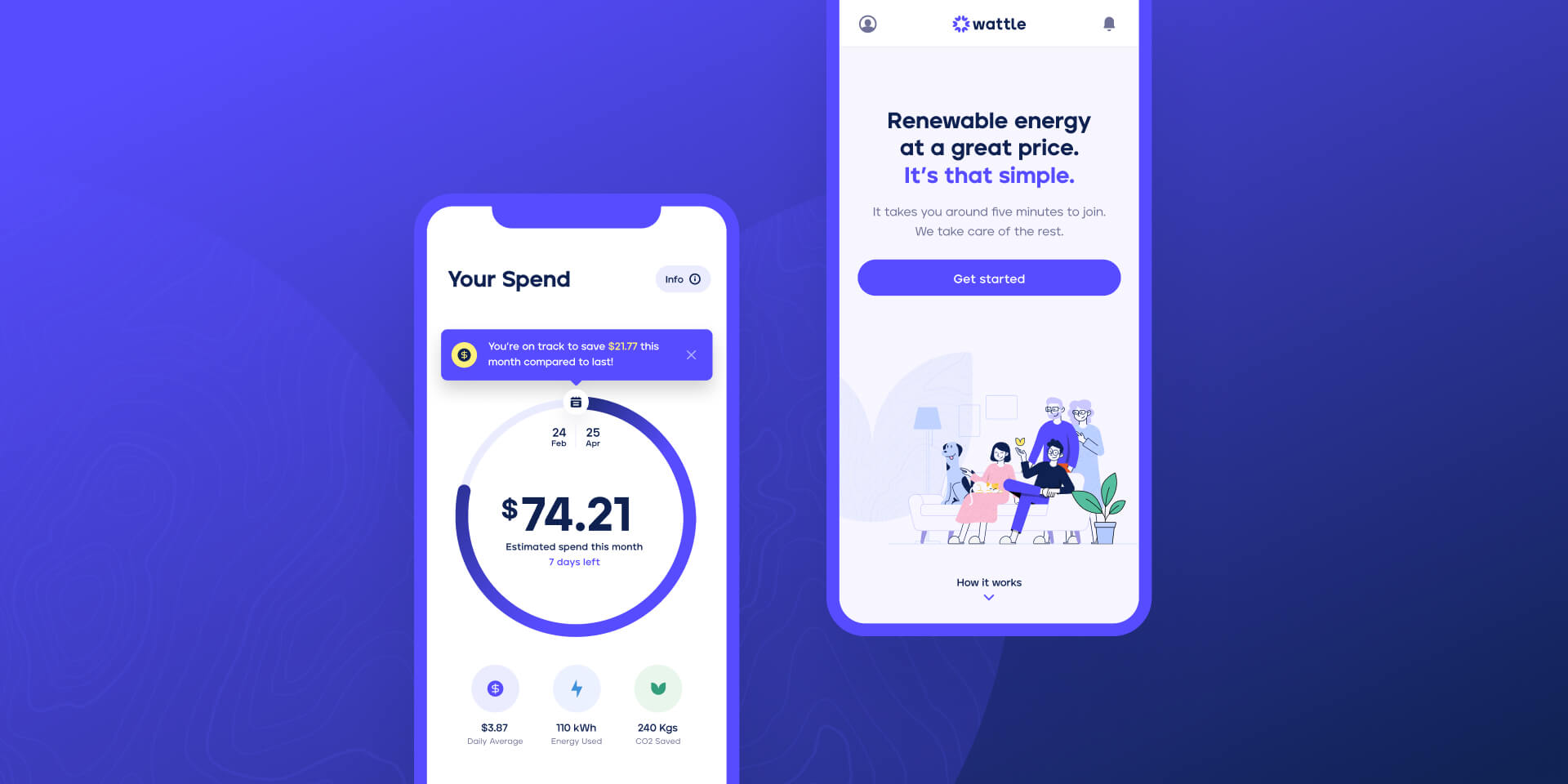 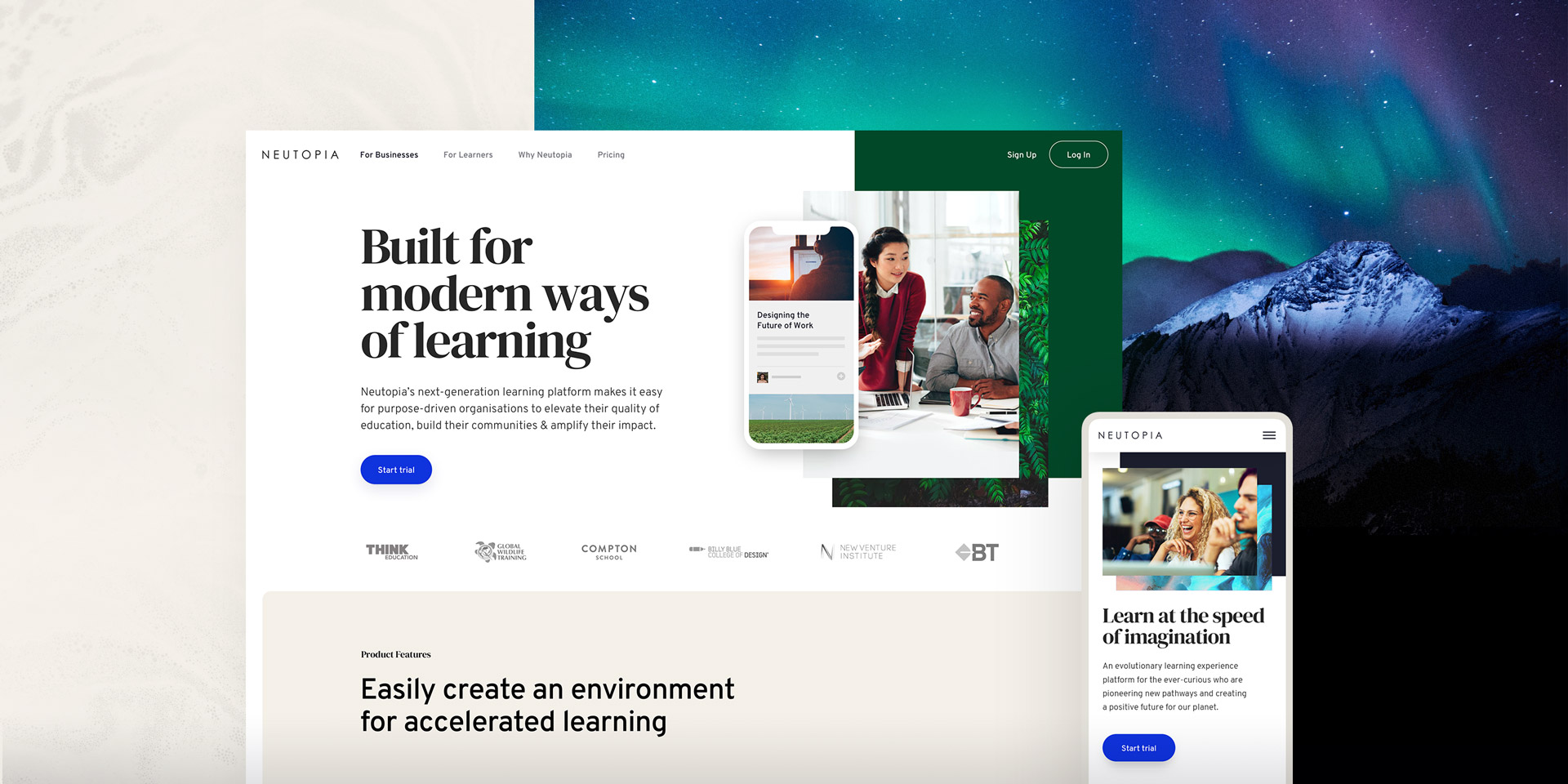 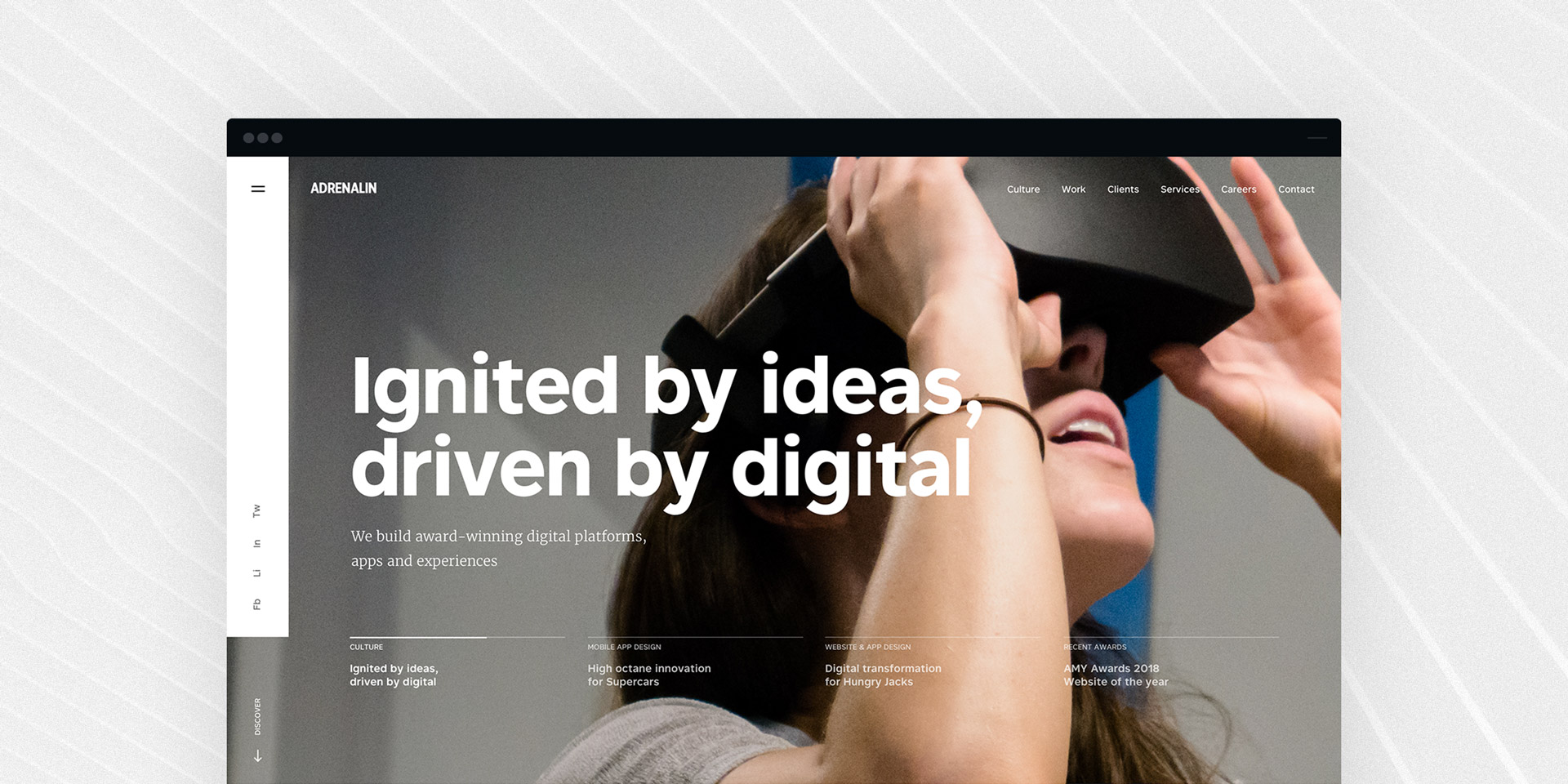 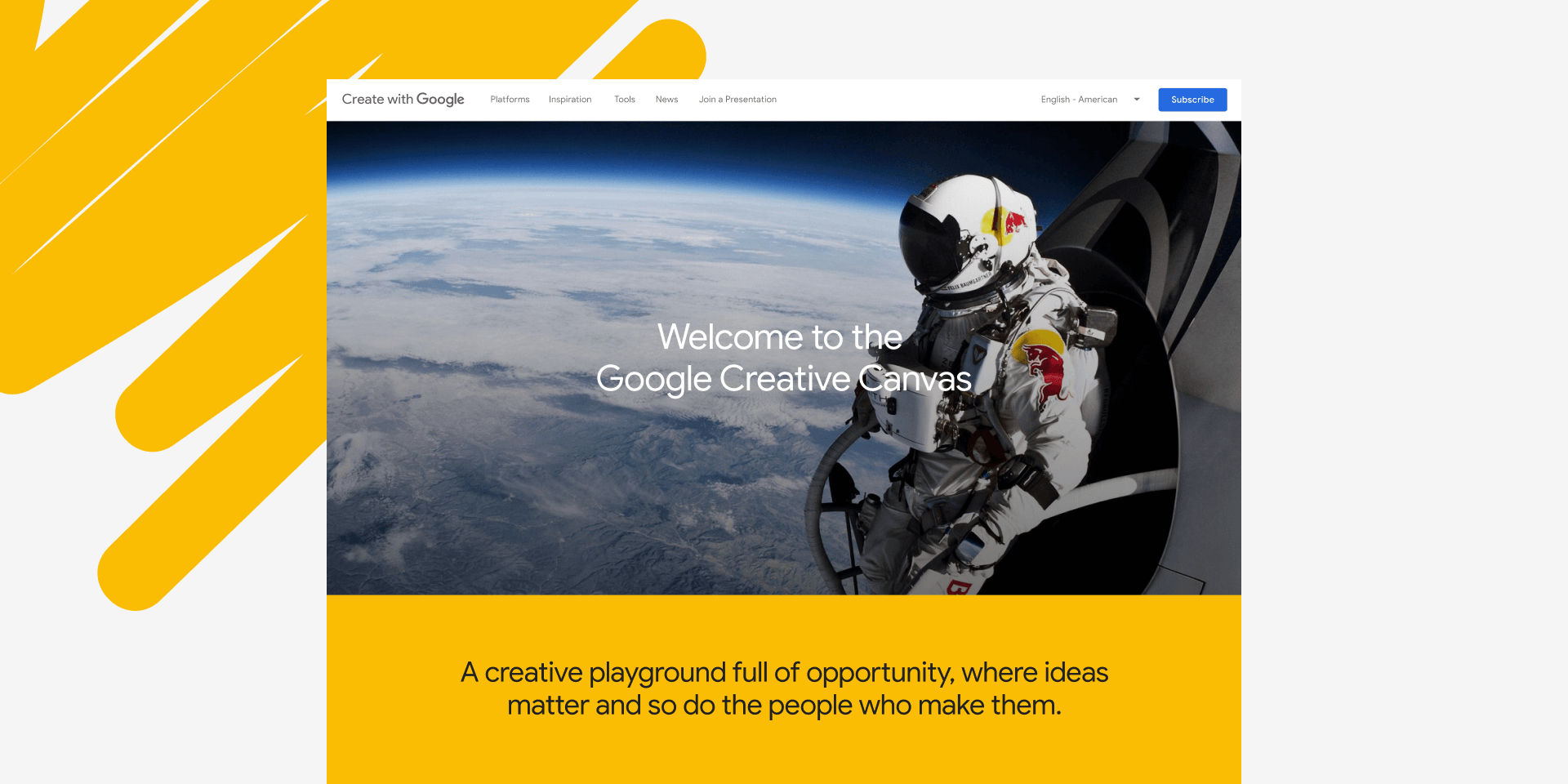 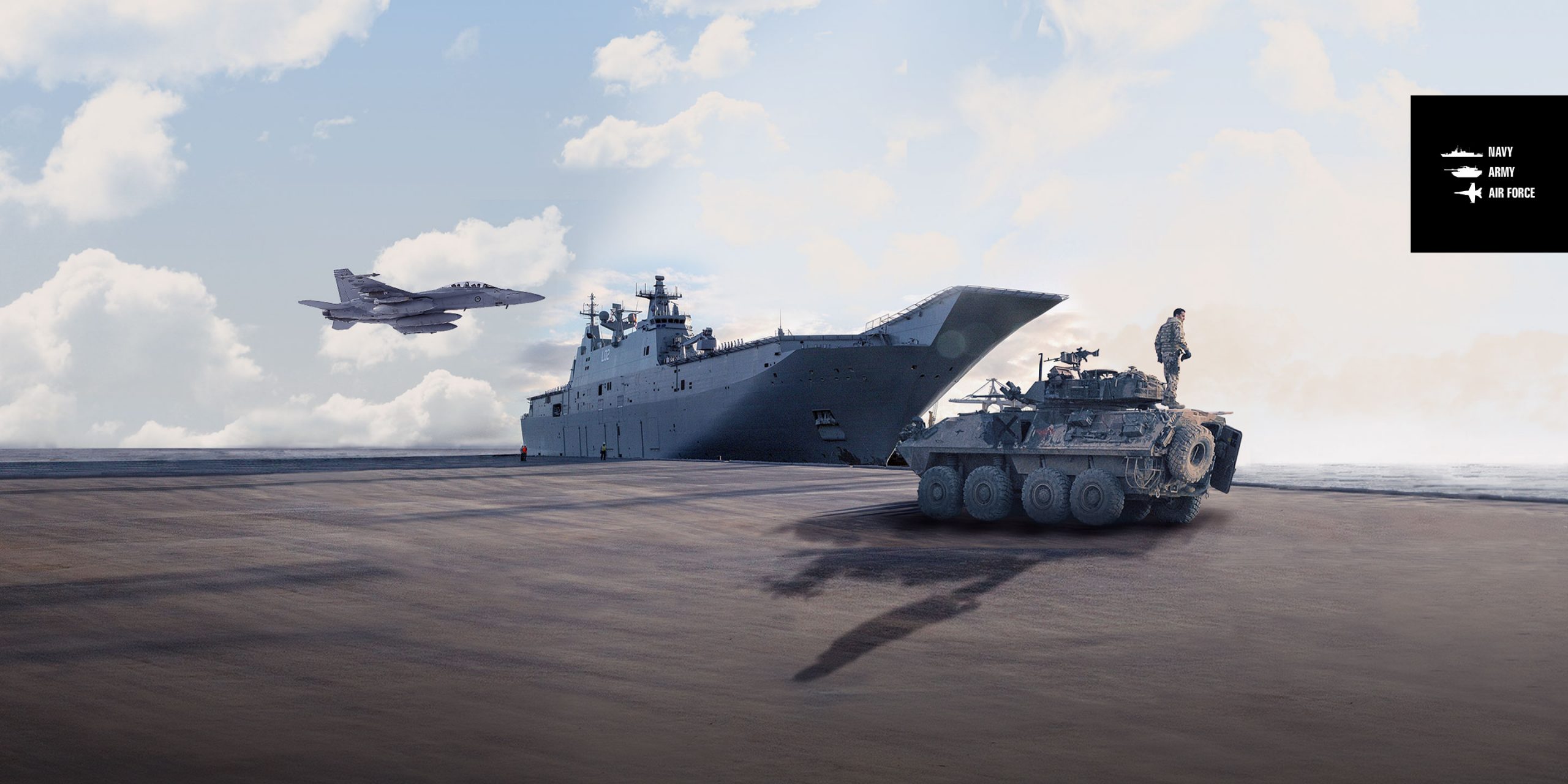 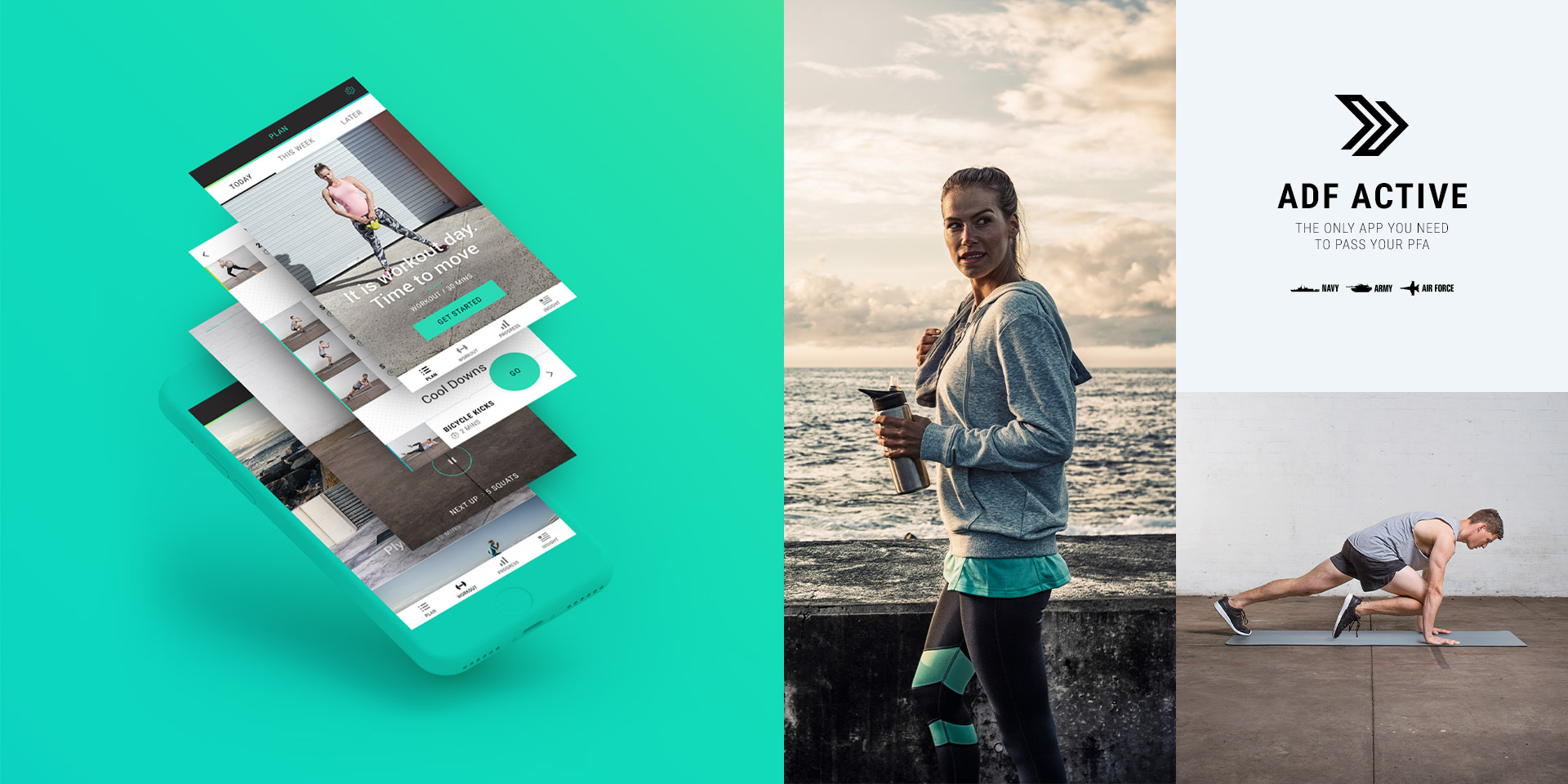 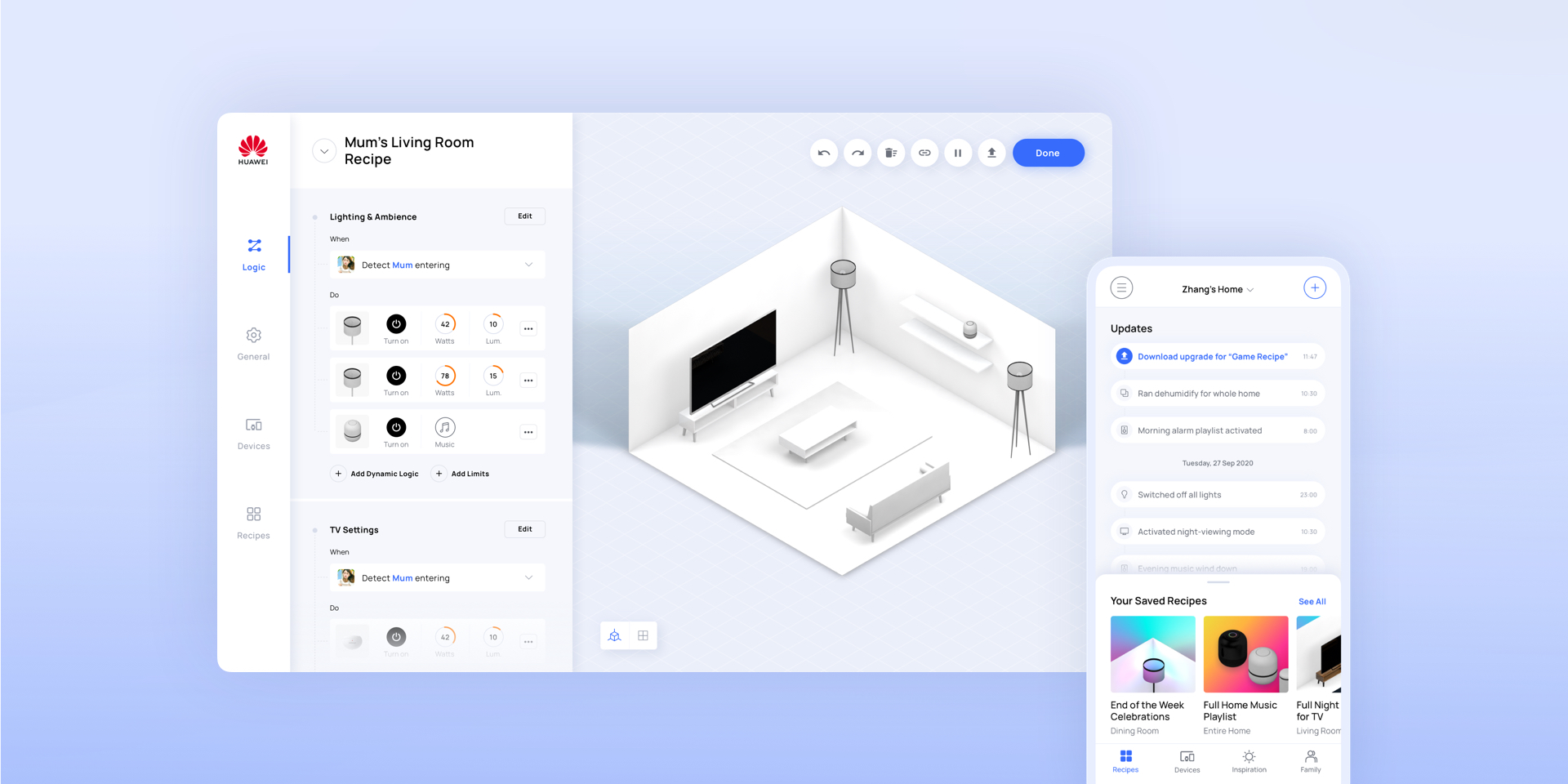